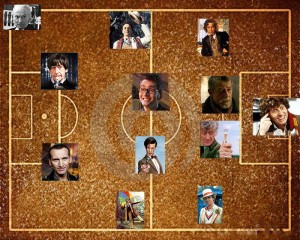 Like many Whovians, my Christmas wish will be fulfilled with another Doctor Who special, and another regeneration episode at that! With the recent 50th anniversary special and a new Doctor on the horizon, it seems like a good point to reflect a bit on the 11 (12?) men who have fully portrayed the Doctor to this point.

Seeing as how soccer (nee football) is one of the favorite past times of the UK, as is watching Doctor Who, I thought I’d put together  a roster for Gallifrey Wanderers FC using each incarnation’s personality traits as the deciding factor on the position they would play.

William Hartnell always seemed like a fancy English gentleman to me, and the episodes I’ve seen with him had him more or less herding his companions through their adventures and getting them out of trouble. Who better to lead this team of Gallifreyan standouts to victory?

Successful goalkeepers seem to have one character trait in common–they are kooky as hell. That being said, they’re always calm under pressure but don’t mind barking at their teammates to get a better performance in front of them. Tom Baker’s portrayal of the Doctor fits this bill perfectly, grabbing shots faster than Jelly Babies.

Center backs need to be the most physically imposing player on the pitch. Of all of the Doctor’s regenerations, Jon Pertwee always seemed the most able to just use brute force to save the day, making him a no brainer to anchor the defense and reverse the polarity of opposing attacks.

John Hurt’s Doctor didn’t have much screen time, but he didn’t need it to leave an impression as a tough son-of-a-bitch who isn’t afraid to do what’s necessary to win. Put this man in as the last resort when all else has failed, telling opponents “No more!”

Paul McGann may not have had a lot of screen time as the Doctor, but his extended universe appearances fleshed out quite a memorable character. He went through a heap of trauma and still kept a positive attitude–put this together with his proficiency at stealing the ball from opponents and you’ve got one tough outside back to break down…

Peter Davison portrayed a Doctor that didn’t really show a lot of initiative, focusing more on trying to help people and be part of a winning team. His brave-hearted self-sacrifice and cautious approach would make him a good fit as a defensive back to slow down opposing attackers.

Matt Smith’s youth career as a footballer is actually the catalyst for me creating this list. Besides the fact that he’s probably the most capable at playing the sport and controlling a midfield, the Eleventh Doctor always seemed to be in control of events and coordinated successful counters to the seemingly insurmountable threats he faced, such as the Silents and the Weeping Angels. Also, midfielders are cool.

David Tennant may be the Doctor most responsible for the resurgence in popularity of the franchise, and a lot of his charisma is his ability to think quickly on his feet and work with strangers to save the day. Sounds like a molto bene fit to connect play and keep everyone involved…

Sylvester Mcoy’s Doctor may have seemed like a stumbling idiot, but that was only his step-over move to deke his way past defenders and put his team in a position to win. His mastery of tactics and adherence to a gameplan would make him a lethal threat along the touchline.

Colin Baker may not have been everyone’s favorite Doctor, but his brash and flamboyant style with his desire to win would have made him a dynamite attacking winger. He also wouldn’t be afraid to stick in hard for a tackle if you took the ball away from him! Hmm, I wonder… 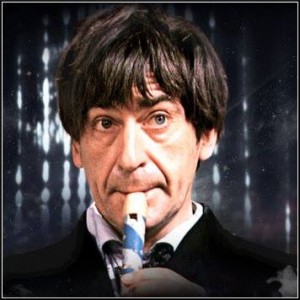 Patrick Troughton’s Doctor seemed a bit scatter-brained at times, but his unpredicatbility saved the day more often than it got him into sticky situations. This ability would confound defenders trying to mark him with butterfingers and would allow him to convert those much-needed goals out of nothing.

Christopher Eccleston’s time as the Doctor was relatively short-lived but he performed excellently in reviving the series from a 9-year hiatus. His character may have had deep emotional issues as a result of his regeneration from the Day of the Doctor, but his ability to focus on the primary objective would make him a great option to rely upon to put the ball in the back of the old onion bag. Fantastic!

Besides occasionally lending his voice to Playing doctor Podcast, you can find Dennis heading up the STAFF MEETINGS on the USS Boner. Subscribe to  Dork Trek!
He also is on Twitter! @DennisBlkAndAsn