This week Jennie and Ben are joined by longtime friend of the show Drew Stewart to discuss the eighth and ninth episodes of season 3, Human Nature and Family of Blood.

The episode begins with the Doctor and Martha barely escaping the clutches of an unseen enemy. A frantic Doctor tells Martha she is the key to their escape just before the Doctor wakes up in his PJs with Martha bringing him breakfast in bed. No, Martha’s dreams haven’t come true, the Doctor has disguised himself as a human school teacher at an all boys boarding school on Earth in 1913. Now they must remain in hiding from the Family of Blood or all will be lost. But when the Doctor’s special watch gets stolen just when Martha needs her Doctor the most love is in the air between the human Doctor and the boarding school’s Matronly nurse. In the end the Family of Blood learns what the true rage of a Time Lord feels like and the Doctor breaks the heart of another blonde, all the while ignoring Martha.

Available on Netflix and Hulu Plus

You can check out Drew Stewart’s other work on the Trek.FM network,

Back from an exciting weekend at Intervention 6 Jennie and Ben didn’t even have time to unpack before they were off to the Kempsville Area Library in Virginia Beach to record a live show as part of the library’s “Evening of the Doctor” program. As always the crew had a great time visiting with their library friends.

One of the events during the Evening was a vote for your favorite companion. The results were rather interesting:

There were some interesting responses added, such as: Handles, K9, and “Not Clara”.

This week Jennie and Ben discuss the third season episode “42” which coincidentally is the 42nd episode of the Playing Doctor Podcast. The Doctor and Martha land on a spaceship that’s about to crash into a sun in– wait for it — forty-two minutes. A mysterious “infection” threatens to kill the crew before they have a chance to crash and burn in the sun. Their only hope is to know their Beatles trivia and avoid escape pods.

Special thanks go out to Librarian Denise Walker and Crystal Parker for inviting us to the show and once again putting up with our antics. We really enjoyed ourselves and were honored to once again be asked to participate in the evening’s events.

This week we are joined by Tommy V. and Lauren as we discuss series 3, episode 4, “Daleks in Manhattan”.

The Doctor and Not-Rose land on November 1, 1930 (GREAT SCOTT!) to witness the construction of the Empire State building. They meet some friendly hobos and begin to uncover the mysterious disappearances in the otherwise perfect utopia known as Hooverville.

Meanwhile, four Daleks known as the Cult of Skaro have taken over the construction of the Empire State building with a Frankendalek genetic lab. Using their creepy pigmen slaves to kidnap more humans, the Daleks plan on harnessing gamma radiation from a solar flare to create a master race of Dalek-human hybrids.

As usual, the Doctor and his Companions risk life, limb and snout to thwart the evil plans. The Doctor’s compassion allows Dalek KHAAAAAAN to survive in the end, undoubtedly to return again soon.

Check out our hot new merchandise in our new online store:
https://squareup.com/market/racomics

Recently at (Re)Generation Who we had scheduled to record a podcast during our panel. While setting up for our recording we had the pleasure of meeting Nev Fountain who was finishing his panel and chatting with Proper Ben (Taylor) and FotS Craig Cobalt. We ended up having the opportunity to spend our panel time having a chat with Nev about his work with the Big Finish Audio Dramas, a lifetime of being a Doctor Who fan, and being a writer.

Many of our listeners will recognize Nev as the author of the Mervyn Stone Mysteries, his work on the audio dramas and also as writer for the popular British comedy series Dead Ringers. We were honored to have the chance to speak with Nev and look forward to the release of his upcoming novel “Painkiller” due out in early 2016. 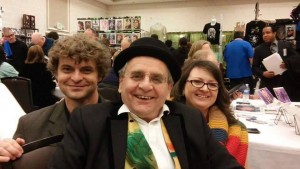 Jennie and Ben returned from (Re)Generation Who after three days of the best Doctor Who Convention EVER. After taking a few days to recover they sat down to recount their exciting weekend in Hunt Valley, MD. As you’ll hear in this episode, words escape them. There was just too much happening all weekend to fit into one show.

Playing Doctor Podcast would like to take a moment to thank the creators of (Re)Generation Who, Oni and Harknell and the wonderful staff they gathered together to make such a terrific show. The entire weekend was filled with meeting old friends, making new friends and tears of joy.

The guest list was phenomenal and we enjoyed meeting Colin Baker, Sylvester McCoy, Tom Baker (via Skype), Nicola Bryant, Sophie (Aldred) Henderson, Andrew Cartmel, Terry Molloy, Deborah Watling, Patricia Quinn, Colin Spaull, Nev Fountain, and so many more that we feel bad for leaving anyone out. We were busy working our table and doing panels so we didn’t get to go to all of the unbelievable programming. We especially wanted to see Bree Geek’s Weeping Angel Robot but it was standing room only in that panel.

We met a few other podcasters doing live shows and want to send a shout out to our Trek brethren at Trek Off Podcast. We recorded a few minutes with them by way of introduction and look forward to dropping by their show some time in the future.

We let Future Ben (he says Proper Ben) out of Jennie’s basement to record with us. Ben Taylor is a big part of our con family and he keeps us in line. Whether he’s spreading the word about Playing Doctor Podcast or manning our table when Sleepy American Ben won’t wake up on time, we can always count on Proper Ben to do right by us.

This year we introduced a new merchandise design by Jennie. You may have heard about the TARDIS Access badge or seen one if you were at the convention. We greatly underestimated the popularity of these badges and sold out on Friday. We will be contacting the folks who signed up for one soon and everyone else can catch up with us at Tidewater Comicon or Intervention to pick one up. Again, Future Ben was a big promoter of the TARDIS Access Badge and I think his wearing it around the con helped us to sell out.

Be sure to keep an eye on this page, Facebook, Google+, and Twitter to find out all about our upcoming appearances. We love meeting listeners and making new friends. 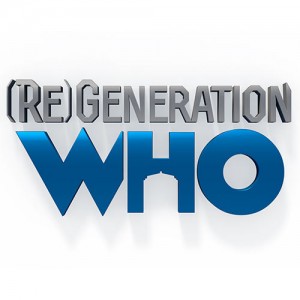 Playing Doctor Podcast would like to take a moment to send our condolences to the family of Mr. Leonard Nimoy. Although he was never directly associated with Doctor Who, Mr. Nimoy was an inspiration to generations of science fiction fans and we mourn the loss of such an icon of American television history.

In this episode of Playing Doctor Podcast we travel to the Kempsville Area Library in Virginia Beach. We were pleased to be invited to participate in the Library’s Doctor Who night “Calling All Whovians” and we look forward to participating again in the future (or maybe even the past, because TARDIS). The night’s discussion was “Doctor Who: Fifty Years to Overnight Success”. We examined how that even though Doctor Who has been on the air and popular in Britain since 1963 and enjoyed niche success in the US during the 1970s and 80s, it wasn’t until 2010 and the arrival of Matt Smith as the Eleventh Doctor that Doctor Who exploded in popularity in the United States. While this isn’t a SPOILER episode we do discuss several topics across all five decades of Doctor Who so there may be a few minor spoilers.

Special thanks go out to Librarian Denise Walker and Crystal Parker for inviting us to the show. We really enjoyed ourselves and were honored to be asked to participate in the evening’s events.

In this spoiler filled episode of Playing Doctor SPOILERS, Jennie and Ben discuss the 2014 X-mas special. There’s foul language and we’re not talking about the Christmas Goose.

This week Jennie & Ben are joined by long time listener Kirby Bartlett-Sloan from The 20mb Doctor Who Podcast to discuss “The Shakespeare Code”, Episode 2 of Series 3.

After several months of having to wait until our episodes were posted before we could get Kirby’s Corrections™ for what we had said on the show we decided it would be quicker to get Kirby on the show so he could correct as we go! This episode was recorded before we started the summer convention season so Kirby has had plenty of time to get his notes together in preparation for this episodes corrections.

Tonight we travel back to jolly old England and meet Billy Shakespeare. He’s your average Elizabethan man-about-town who happens to be a pretty decent playwright, but that may be the only decent thing about this tomcat. Things are amiss at the old (new) Globe Theatre when the Witches of Eastwick (or Eastenders?) show up with brooms at hand. You’re a wizard now, Harry but this quidditch match is for keeps. Doomfinger and Bloodtide are after the Golden Snitch and despite their awkward innuendo laced names they just may win and release the Carrionites into our world.

Now the Doctor, the NotRose, and Billy Shakespeare are going to party like it’s 1599 because These Witches be Trippin